Milk thistle in seeds
Milk thistle is an herb that detoxifies the liver and not only...
Net weight: 350g
Packaging: Very practical, which keeps the contents fresh and allows you to open & close it multiple times.
✅Biological Product

Thistle, an herb that detoxifies the liver, is good for diets, reducing sugar, but also as an antidote to poisoning.

Thistle is known mainly as an antidote in cases of mushroom poisoning. Many European Poison Control Centers use the spirit for this reason (reducing mortality from 30-50% to less than 10%).

The active ingredient in thistle is silymarin, which helps regenerate damaged liver cells and large sections of tissue by activating protein synthesis in liver cells by increasing the activity of genetic material (DNA-RNA). It also protects liver cells, preventing toxins from entering them and neutralizing toxins that have already entered.

According to many blind, controlled trials and clinical studies, thistle significantly helps to reduce organic damage from alcohol, while its long-term use seems to increase the survival expectancy in patients with liver damage. It also favorably changes the levels of liver enzymes (transaminases) in patients with cirrhosis, viral hepatitis and fatty infiltration, improves the symptoms of toxic damage to organs (nausea, weakness, loss of appetite, fatigue), fatigue and chemical drugs. In addition, it increases the flow of gastric fluids that relieve indigestion and headaches associated with congestion of detoxification organs. 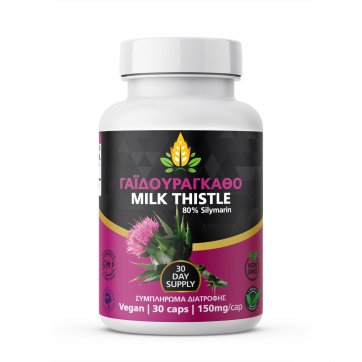