Thistle with 80% Silymarin in Herbal Capsules
Dietary supplement with thistle extract, the herb that helps our liver and not only ...
The main active ingredient in thistle, which has hepatoprotective properties, is silymarin. In addition, milk thistle is a rich source of flavonoids (silibinin, silidianin and silicristin), quercetin and vitamin E.
Thistle is one of the most powerful hepatoprotective elements of nature as it appears through studies that it helps protect the liver, regenerate liver cells, as an aid to digestion, in the treatment of psoriasis and has strong antioxidant and anti-inflammatory properties.
Liver protection is beneficial, not only for the liver itself, but also for the overall health and well-being of the whole body. Thistle extract is widely recognized for its ability to protect the liver, while being a powerful antioxidant.
Product Notified to EOF
No. Γνωστοπ. 130329 / 23-12-2021
Date Expires: 11/2025
NEW PRODUCT, WITH TITLED ASS EXTRACT
This product contains thistle extract and not just powder from its seeds.
ΗWhat is the difference between seed powder and extract?
The active ingredient we need from Thistle, which is Silymarin, is contained in a very small percentage in the powder from its seeds. This particular herbal capsule contains titrated thistle extract with 80% Silymarin !!! In this way we ensure the maximum quantity, quality and effectiveness of the beneficial ingredients we need from it !!!
Also titrated extract means a constant amount of active substances of the contained herbs that have beneficial properties.
Packing:
✅30 herbal capsules
✅150mg / Capsule (120mg Silymarin)
Dosage: 1 capsule per day
.The capsule shell is vegetable
The product is manufactured in Greece with the following Certifications:
PMGPM / ISO 22000 / ISO 9001 conditions
With DIO certifications
Permission from EOF
Permit from the Ministry of Rural Development
Permit from the Ministry of Food
Permission from the Ministry of Health
✅FDA APPROVED
.Raw materials from award-winning growers and approved by the US Food and Drug Administration (FDA approved).
ΣυσκευPackages according to EFSA are used in the packages.
✅Vegan
ONNON GMO (without genetically modified ingredients)
✅Microbiologically tested

Do not exceed the recommended daily dose

This product is not intended to prevent, treat or cure any human disease. Consult your doctor if you are pregnant, breast-feeding, on medication or have health problems

Keep out of the reach of small children

US DETOXIFICATION
As a support and strengthening of the liver, thistle extract thanks to silymarin, acts as a powerful cleanser of the liver, rebuilding liver cells, reducing liver damage and removing toxins from the body that are processed through the liver.
Thistle is effective in the natural reversal of toxicity in the body, including the harmful effects of alcohol consumption, pesticides on our food, heavy metals in the water supply and pollution of the air we breathe.
The liver is actually our largest internal organ and is responsible for performing a number of basic detoxification functions. The condition of our blood throughout our body depends mainly on the health of our liver.
The liver helps to remove toxicity and harmful substances from our blood, helps in the production of hormones, detoxifies the body, releases sugar into the bloodstream to give our body stable energy and secretes bile in our small intestine, so that the fat to be absorbed from food. You can see why liver problems and liver dysfunction can cause so many problems!
Thistle extract has historically been used for a variety of liver diseases, including:
alcoholic liver disease
Fat in the liver
acute and chronic viral hepatitis
liver diseases caused by toxins

REGULATION OF BLOOD SUGAR
According to the National Institutes of Health, there is some exciting research showing that taking silymarin, the main chemical found in thistle, along with conventional therapies, can help control the symptoms of type 2 diabetes by promoting better blood sugar control. in the blood.
The valuable antioxidants found in thistle have been reported in experimental and clinical studies to help lower blood sugar levels in people with insulin resistance.
A 2006 study by the Department of Pharmacology of the Plant Protection Institute found that when diabetic patients received silymarin extract for four months, their blood sugar and insulin levels improved significantly compared with imaginary patients.
This may be because the liver is partly responsible for regulating hormones, including the release of insulin into the bloodstream. Insulin is responsible for managing blood sugar levels, which is especially important for people with diabetes.

BALL PROBLEMS
The liver is an important digestive organ, which helps process the nutrients and toxins that enter our body through food, water and air.
Because the liver and other digestive organs, such as the gallbladder, pancreas, intestines, and kidneys, work closely together to improve liver health, thistle can also help prevent gallstones and kidney stones.
Due to its ability to increase bile flow, protect against liver diseases such as non-alcoholic fatty liver disease, and promote liver detoxification, thistle may be helpful in preventing gallstones.
Gallstones form when cholesterol and other materials in your gallbladder come together. This is problematic because they can become more solid and stick to the lining of your gallbladder.

ANTI-AGING ACTION
Thanks to the antioxidant content of thistle, the herb can really help slow down the aging process. This applies to both the surface of your skin and your organs, as antioxidants can protect your body from chronic diseases.
The protective properties of thistle for the skin make it ideal for reducing visible signs of aging, so eating thistle can be an easy way to prevent skin cancer and skin damage such as acne, blackheads, wrinkles, lines and discoloration.
The silymarin found in thistle can also protect against the depletion of glutathione, which is a "major antioxidant" that is extremely useful in preventing disease.
The major role of glutathione is to help fight oxidative stress that leads to diseases such as cancer, diabetes, heart disease and neurodegenerative diseases such as Alzheimer's disease. It can help prevent damage to important cellular components caused by reactive oxygen species, such as free radicals.

POISONING BY CHEMICAL TOXINS
Thistle is known mainly as an antidote in cases of mushroom poisoning.

Take 1 capsule daily with a glass of water or juice with breakfast.
People with difficulty swallowing can open the capsule and mix the contents in water or juice.

Products that are dietary supplements are notified to the National Medicines Agency.
Do not exceed the portion of a supplement without the advice of your doctor.
Do not exceed the recommended daily dose
Dietary supplements should not be used as a substitute for a balanced diet
This product is not intended to prevent, treat or cure any human disease. Consult your doctor if you are pregnant, breast-feeding, on medication or have health problems
Keep out of the reach of small children
Poison Center Telephone: 2107793777
Traffic Manager:
Barbas Filippos - Kimon "Elixir"
Konitsa, Ioannina - 44100
Store in a dry, shady and cool place (<25◦C) 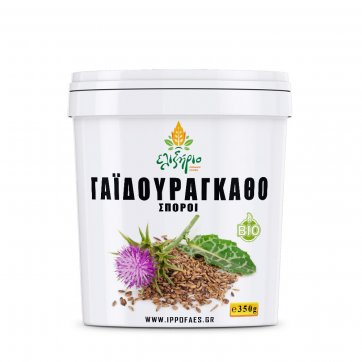