Cocoa nibs organic
Cocoa nibs are very small pieces of chocolate straight from the raw raw "bean" of cocoa of the Criollo variety which is the highest quality and rarest in the world.
No sugar, no salt
Net weight: 300gr
Packaging: Very practical, which keeps the contents fresh and allows you to open & close it multiple times.

It is a fact that it is a superfood of divine dimensions, as it is the richest source of magnesium and contains many antioxidants, which contribute to the proper functioning of the cardiovascular system.

In particular, cocoa is twice as antioxidant as red wine and three times as much as green tea!

It is also rich in calcium, iron, copper, zinc and potassium.
It is worth mentioning that cocoa also works as an antidepressant.

Cocoa has high concentrations of flavonoids and procyanidins, ingredients with antioxidant activity that fight free radicals and protect against cancer, heart disease and aging.

It is very rare to find so many nutrients concentrated in a single product, which is why cocoa is considered a superfood.

Antioxidants
According to a study from Cornell University, the concentration of antioxidants in hot cocoa is almost twice as strong as in red wine, 2-3 times stronger than green tea and 3-5 times stronger than black tea. The study's lead author, Professor Chang Yong Lee, reports that more antioxidants are released when cocoa is heated. These antioxidants help with anti-aging, liver and blood detoxification, cardiovascular health and lower cholesterol and sugar levels.

Cardioprotective action
Cardiovascular disease is the leading cause of death worldwide for both men and women. The flavonoids contained in cocoa improve the elasticity of blood vessels and blood circulation. They also help reduce platelet aggregation, making cocoa similar to aspirin. A cup of hot cocoa is the best way to protect the health of your blood vessels.

Good mood
Cocoa powder increases the levels of mood-enhancing neurotransmitters in the brain. It activates serotonin, the joy hormone and endorphins and acts like antidepressants, causing feelings of joy and pleasure and strengthening the body's defenses against stress.

Strengthens the immune system
Just one tablespoon of sugar-free cocoa powder provides 3-9% of the recommended daily intake of iron, manganese, magnesium and zinc. In addition to transporting oxygen, iron helps produce red blood cells and is vital for your immune system. Manganese is a component of cartilage and bone, which helps in the metabolism of enzymes and nutrients. Magnesium helps maintain energy and a normal heart rate. Zinc is vital for the production and growth of new cells and cells of the immune system. Without enough zinc, the number of cells that fight bacteria decreases and makes you more vulnerable to disease.

You can try them plain, with a sweetener of your choice such as agave or maple syrup as well as being a key ingredient in muesli, cereals, yogurt, ice cream enjoying the benefits of this invaluable superfood. 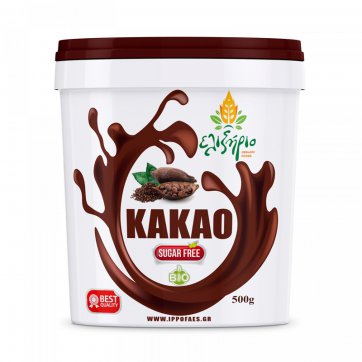